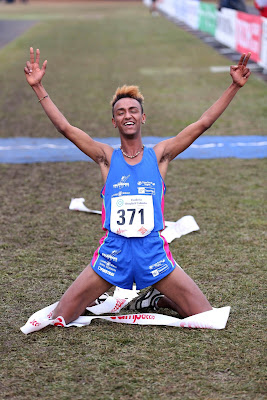 (San Giorgio su Legnano) – Yeman Crippa will run Campaccio for the first time with the biggest athletes. He had already competed and won several editions in the youth categories, but Wednesday the 6 he will run finally between the world’s top runners in cross-country.
Yeman Crippa is two times European champion Juniores, in 2014 and a few weeks ago in France. His life changed for the best in 2003 thanks to Roberto and Luisa Crippa, a couple from Milan.
“Roberto and Luisa adopted me from an orphanage in Addis Abeba, where I was staying after my parents were killed during the Ethiopian civil war” – said Yeman – I was the first moving to Trentino with my sisters, followed then by my brothers and cousins.

“I remember when as a kid I used to play chasing the cows or taking long walk to collect some water. The simplest things made us happy. Here I had everything, I’m very grateful”. “I was enrolled in football teams but the coaches noticed that I was fast, so I started training in Atletica Valchiese”
His brother Neka has a very important role in this change “Nekagenet is in the National team too, he prefers longer distances. Now we are both in the Fiamme Oro team and we live together in Trento, near the track field”
What’s next for Yeman? : “I have nothing to lose and lots to learn. I always try, as I did recently at the BoClassic, closing 12th. I want to be in the elite National team in July, at the European championship in July. I want to qualify to the 5000mt improving my personal best, it will not be easy but at Campaccio I want to finish in the best 10”
Then the biggest dream: “I need to improve in the longer distances, 5.000 Mt and 10.000 Mt and work on my mental strength. Learning to have fun also running a slower pace. The Olympics? Of course I hope to be there, but probably Tokyo2020, it’s almost impossible in Rio”.