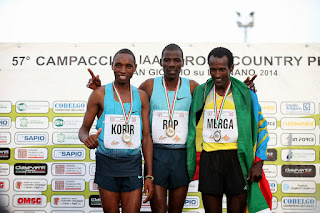 Federica Del Buono forfeits – Sara Dossena confirmed
(San Giorgio Su Legnano) – Countdown started for the Campaccio, second stage of the world circuit Iaaf Cross Country Permit, the highest expression of cross country in the world. Wednesday 6th of January is the day, competitions starting at 10 with Seniores Master and the women race at 13.35, 3 laps for 6km and the men’s at14.10 with 5 laps for 10km. It’s also been confirmed the live broadcast on Rai Sport from 14.00 to 14.50.
A new, great addition to the race, the Ethiopian Imane Merga, cross country world champion 2011 and bronze medalist in 10.000 mt at the World Championship in Dengu the same year. Merga was third at the Campaccio in 2014 following Albert Rop and Japhet Korir and forth in 2012. Two days ago at the BoClassic he ended third, with a very brilliant race. He’s in a great condition and he showed it, Campaccio will be definitely another memorable day.
FEDERICA DEL BUONO – Will not be at the starting line the azzurra Federica Del Buono. Federica doesn’t race and doesn’t since last 13th December, when she represented the National team at the European Championship: “Sadly I must stop for a tendonitis and I can not run Campaccio – she said – It’s a new problem, not to related to my past injury that kept me away from the competitions for several months. I’m starting again and getting better but It still hurts when I run and I can’t overload. I’m sorry, Campaccio is probably my favourite race”.
SARA DOSSENA – Ready to battle is Sara Dossena, also azzurra at the European Championship and overall eighth on the fields of San Giorgio Su Legnano a year ago in 20’36” few seconds right after Federica Del Buono, seventh in 20’27”. The podium was all Kenyan, winner Janet Kisa in 19’00”.  Sara’s result was surprising because today she’s a triathlete of international level, training also in swimming and cycling.
“I’m looking forward to run Campaccio on Wednesday – said Sara Dossena – even if I’m not feeling at my best”.
“I’m feeling more a triathlete than a runner and I train accordantly. I reached great results but Campaccio is a very special and storical competition, I can’t miss it.”.
Confirmed Giuseppe Gerratana, Stefano La Rosa, and the double cross country European champion Yeman Crippa.
In the women race Veronica Inglese, Silvia La Barbera, Sara Dossena, Barbara Bressi, Valeria Roffino, Sara Brogiato e Sara Galimberti
Other athletes at the start, the 2014 winner, Albert Rop from Bahrain, the Ethiopian Asin Haji5000m silver medalist at the Juniores World Championship and Cross Junior World Champion in 2015.  Abdalhah Mande 2014 Mountain Running Junior World Champion and 5th in the 10000mt of the 2014 Junior World Championship. From Kenya Thomas Longosiwa olympic and world champion finalist for the 5000 mt, still in discussion and not yet confirmed, the new cross European Champion, the Turkish Alì Kaya.
Competing in the women race, the Kenyan Alice Aprot, from Barhain Ruth Jebet great steeplechase runner and olympic finalist., Linet Masai from Kenya, olympic finalist, 4th in Bejing in 10000mt and bronze medalist at the 2011 World Championship. Completing the runners already signed, Nicole Bush from USA, the English Lily Partridge and the Ethiopian Sofia Assefa.
CONFERENCE –On the day before the race, 5th January, at 14.30 at Pala Bertelli, will take place the bibs’ ceremony with all the Campaccio top runners, followed by a conference about the similarities between Cross and Marathon. The congress is organized by Officina Atletica with Us Sangiorgese and Centro Studi Fidal, among the speakers Federica Del Buono and Rossella Gramola, coach and Federica’s mother, and also Stefano Baldini, Piero Incalza e the Italian National Team sport director Massimo Magnani.
Best regards
Cesare Monetti
Ufficio Stampa Campaccio