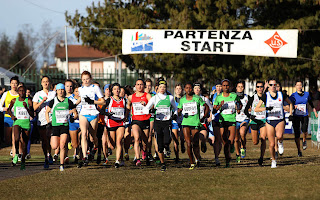 (San Giorgio su Legnano) –  The 59th Campaccio Cross Country will bring again in Italy the best cross country champions on Wednesday January the 6th 2016. It will also be the second round, after the Spanish one in Atapuerca the last 15th of Novembrer, of the world circuit Iaaf Cross Country Permit, the top expression of the world cross country, among the eight stages Campaccio is one of the most historical and renowed.
Yesterday morning at the Credito Valtellinese in Milan, the event was presented by the Major of San Giorgio su Legnano Walter Cecchin and Dott. Giovanni Del Crappo and Dott. Marco De Donàfrom Credito Valtellinese.

Perfectly organized as usual by the Unione Sportiva Sangiorgese headed by Claudio Pastori, with the help from Sergio Meraviglia as General Coordinator and with Marcello Magnani as sport director.
The long day in San Giorgio su Legnano will start in the morning with the Amatori and girls and boys of all the ages, then will be the turn of the biggest champions.  Last year the winner was Dathan Ritzenhein, from USA, in the women race the first crossing the finish line was Janet Kisa, from Kenya. A special mention to the memorable 7th place of the young Federica Del Buono, that will run at this year edition, after a team bronze medal U23 at the European Cross Country Championship, a week ago.
The Italy will be represented by Giuseppe Gerratana, best placed azzurro at the European Championship and Stefano La Rosa, but all the focus will be on the double Junior European Champion Yeman Crippa.
In the women race, at the starting line will be Veronica Inglese, Silvia La Barbera, Sara Dossena, Barbara Bressi, Valeria Roffino, Sara Brogiato and Sara Galimberti. Several big athletes both European and African are still to be announced.
Already confirmend the 2014 winner, Albert Rop from Bahrain, the Ethiopian Asin Haji 5000m silver medalist at the Juniores World Championship and Cross Junior World Champion in 2015.  Abdalhah Mande 2014 Mountain RunningJunior World Champion and 5th in the 10000mt of the 2014 Junior World Championship. From Kenya Thomas Longosiwa olympic and world champion finalist for the 5000 mt, still in discussion and not yet confirmed, the new cross European Champion, the Turkish Alì Kaya.
Competing in the women race, the Kenyan Alice Aprot, from Barhain Ruth Jebet great steeplechase runner and olympic finalist., Linet Masai from Kenya, olympic finalist, 4th in Bejing in 10000mt and bronze medalist at the 2011 World Championship. Completing the runners already signed, Nicole Bush from USA, the English Lily Partridge and the Ethiopian Sofia Assefa.
CONFERENCE – On the day before the race, 5th January, at 14.30 at Pala Bertelli, will take place the bibs ceremony with all the Campaccio top runners, followed by a conference about the similarities between Cross and Marathon. The congress is organized by Officina Atletica with Us Sangiorgese and Centro Studi Fidal, among the speakers Federica Del Buono and Rossella Gramola, coach and Federica’s mother, and also Stefano Baldini, Piero Incalza e the Italian National Team sport director Massimo Magnani.
Best regards
Cesare Monetti
Ufficio Stampa Campaccio
cesare.monetti@runtoday.it