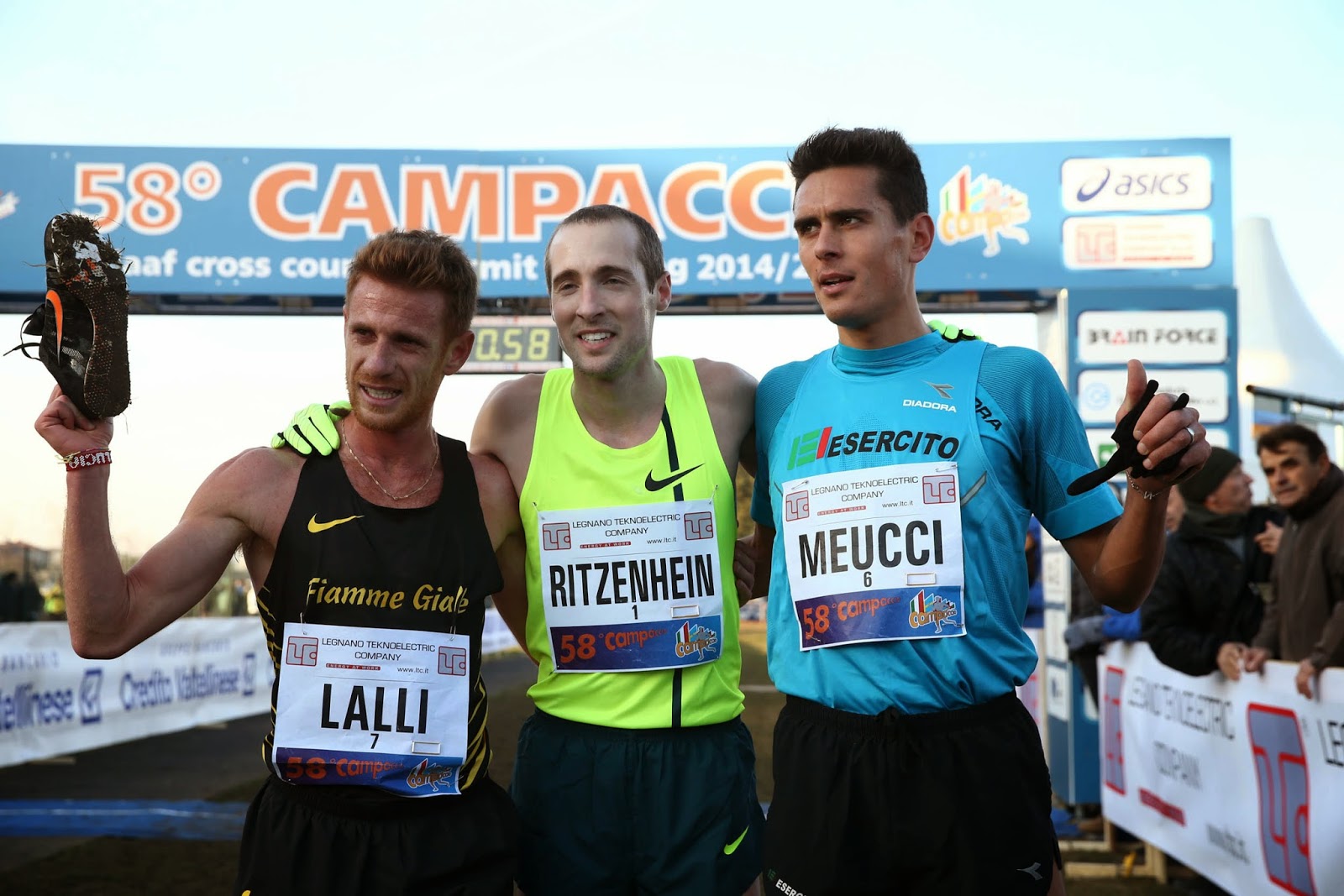 Andrea Lalli and Daniele Meucci weren’t able to make the difference and set a new Italian victory at the legendary cross country in San Giorgio su Legnano. The winner of the 58th edition of Campaccio is the American Dathan Ritzenhein with 29’08”, second Andrea Lalli, supported by the crowd, losing in the very end by only a second. Third place for Daniele Meucci,, the European Marathon Champion can’t keep the pace and ends with a 15” gap with 29’23”.
In the women’s race, three athletes from Kenya on the podium: first Janet Kisa with 19’00”, following Peres Jepchirchir with 19’01”. Third place for Betsy Sainawith 19’04”, definitely positive the race for the azzurra Federica Del Buono, seventh with 20’27”: “I’m satisfied, I’m surprised to be in the first ten and first Italian – Federica said – Cross races are fantastic, they are also a lot more tiring than the trackfield. I must be more concentrated in these kind of races, be more confident, think more, but still I’m satisfied. Next I’ll do the Italian Championship for Club Cross Country, this will be fun for sure, but also really useful for the next season on the track. Let’s go on this way.” Good result also for the triathlete Sara Dossena, eighth with 20’36” and the young Nicole Reina, debuting seniores, twelfth with 20’56”.
In the men’s race, the three protagonists were together running at fast pace since the first laps, until the fourth, when Meucci couldn’t keep up with Ritzenheim and Andrea Lalli, the American sprinting and winning with a short advantage. “I was not able to run as I could in the last kilometre, said Andrea Lalli, barefoot, shoes in his hands – I used a pair of shoes I hadn’t wear in months and those caused a big painful blister”. Nevertheless, Lalli run a good race as the experienced cross country runner he is, even if he is now preparing the Paris Marathon on next April: “29’09” is my best time here at Campaccio, thanks to the field, dry and fast but also I run well, always on the front, with a brilliant pace. With my new coach Renato Canova and the help of Vittorio Di Saverio, we are changing my training for the 42kms. Now I run longer distances in every training session. It’s still tough for me, but I’m getting used to it and I’ll get better. In February I’ll be in Kenya, then back for the Roma – Ostia half marathon and the Italian Championship for Club Cross Country.”.
Daniele Meucci was not as brilliant as Andrea Lalli but he made a good performance, even if 20” slower than his final time in edition 2013 (28’59”): “I’m satisfied, of course I would preferred to win but two years ago cross was my focus and I was at the best of my condition. Now that I’m training for the marathon I’m slower, especially when changing pace, turning and when the path is not flat.”  A really happy winner Ritzenhein: “This race was really important to me, I wanted to check the path last morning as soon as I arrived in San Giorgio, to know what to expect. Before the start, I was back to check again every turn and hill and the condition of the ground. Campaccio is a fantastic competition and it was a really positive experience. Even if I was not feeling at my top condition, I got confident and I gave everything, especially in the last lap. Saturday I’ll be at the Edinburgh Cross then back to the marathons, to qualify for the 2016 Olympics.”
So this is the end of another edition of this cross country that has not comparison in Italy. The appointment is for the 59th edition, 6thof January 2016.