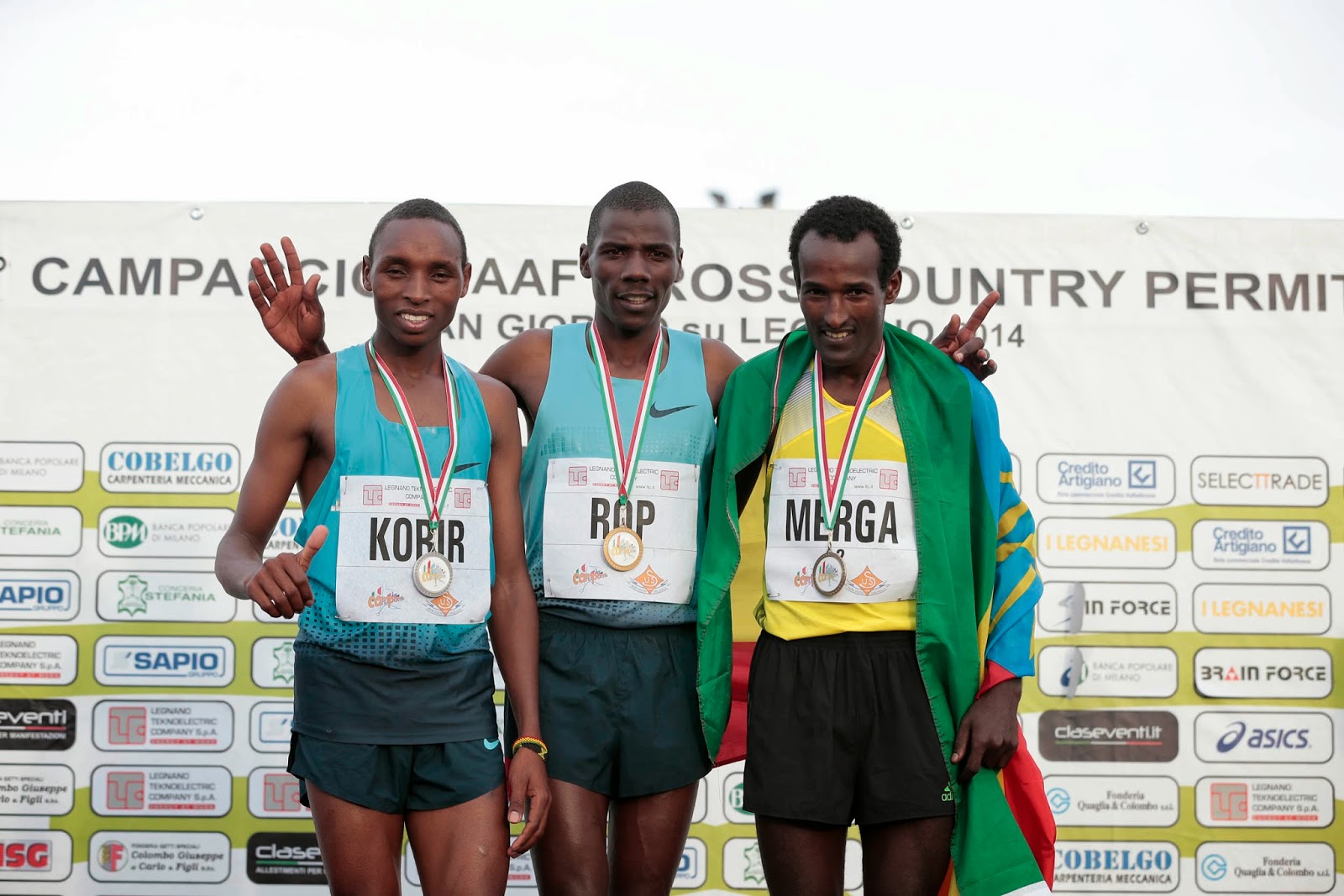 The African super stars dominated the 57thedition of the Campaccio, the sixth leg of the IAAF Cross Country Permit circuit, held on a sunny and unseasonably warm day in San Giorgio su Legnano.
Men’s race: Without a serious opposition from Italian and European runners, African stars set the pace from the early stages of the men’s race. Albert Rop went to front forcing the pace during the first of the five laps of the 10 km race. And passed the first km split in 2:49. A six-men group formed by Albert Rop, Japhet Korir, Imane Merga, Kenneth Kipkemoi, Conseslus Kipruto and Jairus Birech fought it out at the front for most of the race with a big gap over the rest of the field. During the last lap Rop pulled away from Korir and Merga

and in the back-straight inside the Angelo Alberti athletics track he launched his kick to romp home in 28:19 three seconds ahead of reigning World Cross Country champion Japhet Korir. Rop’s time was just four seconds slower than Joseph Ebuya’s winning time in the 2011 edition of this race. It’s the first time that Barhein has won the Campaccio in the 57 editions of the popular Northern Italian race.

“Today I faced very strong rivals. It was a hard race.I tried to pull away from the rest of the field at the start of the race forcing the pace but I did not manage to do that. I saved energy in the mid of the race for the final sprint in the last lap. I am planning to run during the indoor season and take part in the IAAF World Championships in Sopot”
The third place went to 2011 World Cross Country champion Imane Merga who clocked 28:25.
THE ITALIAN RUNNERS:  The best Italian runner was Jamel Chatbi, who finished seventh in 29:53. “I started well and I tried to keep the pace with the African runners, although the fierce pace took its toll. I hoped to beat at least one of the African runners but I did not manage to do that and for this reason I am a bit disappointed. Behind Chatbi Michele Fontana finished eighth. “I wanted to confirm the good result achieved at the European Under 23 Cross Country Championships in Belgrade. I managed to achieve this goal and I feel that I am a more mature athlete at senior level. The African runners are at another level”, said Michele Fontana. Gianmarco Buttazzo finished in the top.10 in 30:32. “It was a good test. I am aiming to confirm my Italian Half Marathon title in Verona. I prefer running on the road because I suffer fom problems on my ankle when I run cross country races. I am happy with my performance”, said Buttazzo
WOMEN’S RACE: Hiwot Awalew, 2013 World Cross Country silver medallist, was the favourite and she did not let down. Ayalew crossed the finish-line in 18’59”, a faster time than the fastest time in the last five years of 19:26. A four-women group formed by Hiwot Ayalew, Senberi Teferi (second in 19:06), Linet Masai (third in 19:09) and Mimi Belete (fourth in 19:17) pulled away from the rest of the field and fought it out for the win until the last lap. During the last lap Ayalew, winner in the last two editions of theAtapuerca IAAF Permit Cross Country race, broke away from Teferi and Masai during the last lap to romp home in 18:59.
“I dedicate this win to my husband who is a marathon runner. I started running in 2009 at school and soon I fell in love with this sport. It was a difficult race on a hard course. I aim at improving my 3000m steeplechase personal best next summer. The best Italian runner was Fatna Maraoui who finished eighth in 20:36 ahead of Layla Soufyane, tenthin 20:39. World mountain running Alice Gaggi finished a good 11th in 20:58