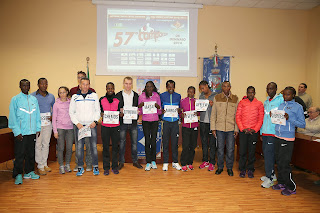 World champion Japhet Korir: “I have no fear of any rival. I am the number one and I will show that tomorrow. Andrea Lalli and Daniele Meucci have pulled out of the race.”
Big names of cross country will fight it out for the win at the 57th Campaccio IAAF Permit Cross Country meeting on a muddy course as in the tradiztion of this race at the Angelo Alberti athletics track in San Giorgio su Legnano.
The race is expected to be held o a muddy course but in sunny weather conditions. African stars are to dominate the Campaccio race. World champion Japhet Korir, winner in the Antrim IAAF Cross Country race on Saturday, will face World silver medallist and 2011 World champion Imane Merga.
Both Merga and Korir won their last race and are in very good form. Merga won his last competition at the Boclassic 10 km race in Bolzano on 31st December Korir won in Antrim on Saturday showing that he is fully recovered from a lung infection which sidelined him from the track season.

“I ran only yesterday in Antrim and I have just arrived to Legnano but I am ready to run on Monday. I don’t fear anybody. I am the best cross country in the world and I will show it on Monday.
Merga i salso very confident for tomorrow’s race. I have fully recovered from Bolzano. I am ready to the challenge”.
Conseslus Kipruto, World 3000 metres steeplechase silver medallist in Moscow, will give them a run for their money, will arrive to San Giorgio su Legnano on Monday morning because he encountered some problems with visa. Another top runner who can mix in the fight for the podium is Albert Rop, the second fastest man in the world in the 5000 metres. The starting list is completed by US Christopher Barnicle eighth at the Boclassic and Poland’s Tomasz Szymowlak.
Unfortunately Italian stars have been forced to pull of the race. Lalli is suffering from a knee injury and needs a perio of rest. Meucci will not run because of flu.
Italy will be represented by Michele Fontana, eighth at the 2013 European Under 23 Cross Country Championships, Italian Half Marathon champion Gianmarco Buttazzo, and Cross Country veteran Gabriele De Nard.
The women’s race is also set to be a all-African race with the clash between Ethiopian Hywot Ayalew, silver medallist at the 2013 World Cross Country Championships and one of the strongest 3000m steeplechase runners in the world, Kenyan Linet Masai, 2000 world champion in the 10000m.and three-time world cross country silver medallist and World 3000m steeplechase champion Milcah Chemos. Ayalew won the last two editions of the IAAF Cross Country Permit Meeting in 2012 and 2013. In the last edition of the Atapuerca race last November Ayalew finished first ahead of Masai.
Unfortunately Italian runners Veronica Inglese and Elena Romagnolo will not take part in the race.
The Campaccio race will be broadcast live on Rai Sport Television from 14.55 to 17.00.
The popular Campaccio event will have an important coverage on social media. Tomorrow it will be possible to follow the race live on twitter. Everyone has the chance to become photographer of the 57th edition of the Campaccio. It will be enough to use the hashtag #campaccio either on twitter or on istagram and the photos will be published immediately on the dedicated page of the official website www.campaccio.it
The new youtube channel of the Campaccio is now available.
These are the official addresses to be connected with the Campaccio race.
Facebook: Campaccio Cross Country Race
Twitter e Instagram: @Campacciocross
www.youtube.com/crosscampaccio