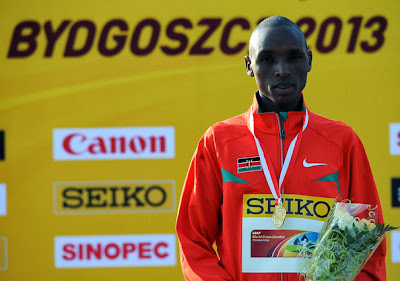 Kenyan Japhet Korir, reigning World Cross Country champion, has signed up to run the Campaccio Cross Country race
San Giorgio su Legnano – The US Sangiorgese sports club, which organizes the Campaccio IAAF Permits Cross Country race, is warming up for next month’s race and there is certainly need for warm temperatures considering the freezing weather of these days.
One month before the Campaccio organizers are building up to sign up the next cross country specialists in the world ahead of next month’s race in the Angelo Alberti athletics track in San Giorgio su Legnano,  living up to the strong tradition of more than 50 years of history of this competition which featured Italian stars like Francesco Panetta, Gelindo Bordin, Antonio Ambu, Franco Arese, Franco Fava, Venanzio Ortis and more recently World class champions like Paul Tergat, Sergiy Lebid, Paula Radcliffe. The list is endless and could coutinue.
The first big name who has signed up to the 2014 edition of Campaccio on 6th January is Kenyan Japhet Korir, the reigning World Cross Country Champion.
“Korir has been the first name we wanted to invite when we started looking for the best athletes”, said Athletics manager and Campaccio Technical Director Marcello Magnani. “We received the official news yesterday. To remain in the IAAF Permit Circuit it is necessary to have the best athletes from at least five different countries and we are moving in this this direction. We are waiting to confirm further names for both the men’s and the women’s races but we will know more about it next week after the European Cross Country Championships in Belgrade.
Marcello Magnani and Event Coordinator Sergio Meraviglia travelled to Belgrade today to attend the European Cross Country Championships and will stay there in the next four days to spot the best athletes, assess their shape and speak with them. It is a necessary trip for Sergio Meraviglia who strongly believes in this race and has organized it with skill for more than 30 years.
In the meantime the first confirmed name Japhet Korir has been announced and his star is already shining. Korir will be looking to live up to his world cross country champion role against a world-class opposition which may be led by Ethiopian Muktar Edris, first at the Campaccio last January, if the Ethiopian will return to San Giorgio su Legnano to repeat this year’s win. Korir ran a 5000m career best of 13:11.44 in the 5000 metres and won the African Junior Cross Country Championships in 2011.