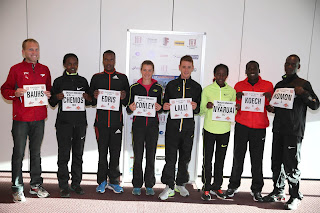 The top atlete who will run the Campaccio Cross Country race tomorrow have already arrived in San Giorgio and visited the race course during the morning, even though many of them have already run here more times in the past. The men’s race will be run on a five-lap course of 10 km. Women will run over a a three-lap course of 6 km.
The Campaccio race will be run on an unseasonably warm day with a temperature of about 15°C, a totally different weather from 2009 when the race was run under a severe snow storm. In these weather conditions the strong African runners start as favourites and they will have the chance to show their speed skills.
Andrea Lalli, fresh European Cross Country champion, will start with the bib number one, while Daniele Meucci, European bronze medallist, will wear the number 2 bib. The best Italian and European runners will run the 56th edition of the Campaccio race.  Kenyan and Ethiopian will give a run for their money. Leonard Lomon, world record holder over 10 km and 15 km on the road and runner-up in the Campaccio in 2011, will wear the bib number 3. Kenyan steeplechaser star Paul Koech will start with the bib number 4, the number 5 goes to Moses Kipsiro and the number 6 to 18-year-old Ethiopian Muktar Edris, reigning World Junior champion in the 5000 metres. Edris posed a serious challenge to World cross country champion Imane Merga losing only in the final sprint. Among the other stand-out names there is also US runner Scott Bauhs, who narrowly missed the podium at the Boclassic. Thomas Longosiwa was forced to pull out of the race due to physical problems which already affected his race in Bolzano some days ago when he dropped out after a few kilometers.