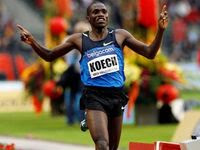 San Giorgio su Legnano – It’s only ten days togo to the 56th edition of the Campaccio Cross Country race, which is part of the 2012/2013 IAAF Permit Events for the second consecutive year and the first International event in Italy in 2013.
The field of top athletes who are expected to take part in the Campaccio on 6th January 2013 at the Angelo Alberti in San Giorgio su Legnano on Sunday 6th January 2013 at 15 is taking shape with the addition of more top names. It is going to be a high-quality race which features Andrea Lalli, recently crowned the European Cross Country champion, and Daniele Meucci, European Cross Country bronze medallist in the same Budapest race.. Lalli and Meucci will not have a easy task because they will face not only the already announced names Thomas Longosiwa, Leonard Komon and  Muktar Edris but also other top names like Paul Kipsiele Koech, a stand-out 3000 metres steeplechase runner. During his career he won the Olympic bronze medal in Athens, was among the best performers at the World Championships in 2005 and 2009 and won many Diamond League competitions. He ran recently on Italian soil at the Rome Golden Gala when he dominated the race in 7:54.31, setting the third fastest time in history, missing the world record by just a few hundredths of a second.
The other top names announced by Technical Director Marcello Magnani are no less impressive. The line-up features Moses Kipsiro. The Ugandan runner, born in 1986, finished fourth at the Bejing Olympic Games and won the World bronze medal in Osaka 2007 in the 5000 metres. He is an outstanding runner in both the 5000 metres and in cross country where he won two world medals: second in 2009 and third in 2010.  The race also features some rising stars who have already showed to be great athletes. After the already announced Edris Muktar the line-up includes two Kenyan runners: 21-year-old John Kipkoech, ninth in the 2009 World Junior Cross Country Championships  and 19-year-old Geoffrey Kirui, a talented runner in the 10000 metres, the same distance over which the Campaccio will be run. In 2011 Kirui set his PB of 26:55.73 at the Diamond League meeting in Brussels and won the World Junior bronze medal in the 10000 metres in Barcelona in 2012.