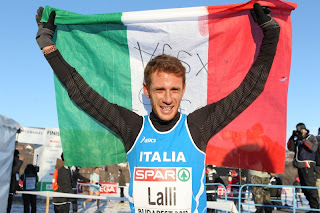 The 56th edition of the Campaccio Cross Country Race, which will be traditionally held on Sunday 6th January and is organized by the Unione Sportiva Sangiorgese, was officially presented on Thirsday 20th December. The Organizing Committee is led by tireless General Director Sergio Meraviglia and by Technical Director Marcello Magnani.
For the second consecutive year the Campaccio Cross Country race has joined the 2012/2013 IAAF Permit Cross Country circuit which kicked off on 11th November in Atapuerca in Spain.
The charismatic President of the US Sangiorgese local club  Claudio Pastori welcomed all those who attended the Press conference. “I want to invite the media representatives to give the Campaccio race the best possible coverage. It is important for us but also for the good of athletics. We need visibility. It’s a unique race in the world for its importance, history and appeal. We should work with enthusiasm and create a great edition of our event. We ask our young athletes to put their great effort, commitment and persistence and we obtain it from them. It’s now our turn and of the turn of media representatives. The US Sangiorgese is a great example of sport club. I want to thank the parents, the Mayor, the town council, and last but not least, the sponsors for their fondemantal role.
MEN’S RACE: Marcello Magnani presented the men’s race: “This year it was not easy to organize the race, but, despite all difficulties, we managed to assemble a spectacular race with Sergio Meraviglia. The difficult economic situation, the budget and the post-olympic year have made our job more difficult. It’s prestigious but at the same time expensive to invite Olympic medallists. It will be a high-quality competition and the first top name is fresh European cross country champion Andrea Lalli. He won the European Junior in San Giorgio su Legnano 2006 and the European Under 23 title in Brussels two years later. The gold medal won a few weeks ago makes him one of the best ever cross country specialists. It is an honour to invite him to run the Campaccio. Andrea Lalli will square off against 27-year-old distance runner Daniele Meucci from Pisa. He is one of the best Italian distance runners and one of the best European cross country specialists, as he confirmed with his recent European bronze medal. This year Meucci won a great European 10000 metres silver medal on the track in Helsinki which followed up his European bronze medal in Barcelona 2010. Meucci and Lalli will take on Kenyan Thomas Longosiwa, Olympic bronze medal in the 5000 metres in 13:42.36 in London and 25-year-old Leonard Komon, who finished second in the Campaccio in 2011 behind World Cross Country champion Joseph Ebuya. Komon currently holds the 10 km and the 15 km road race world records. The field also features young runner Muktar Edris, world junior champion in the 5000 metres in 13:38.45 in Barcelona 2012,  third at the International Giro Podistico Road Race in Castelbuono and second at the Giro di Trento last October. He is still 18 years old but he is really a strong runner”
WOMEN’S RACE: The women’s race also features an Italian athlete who may stand out. It may be the right year for Elena Romagnoloto add her name to the winner’s list after her second place in 2010 behind Aniko Kalovics who scored one of her many wins in this race”, added Magnani. Thirty-year-old Romagnolo finished 15th in the 5000 metres Olympic final in London. Romagnolo will face Italian top runner Silvia Weissteiner who will be looking to bounce back from her disappointing performance at the European Cross Country Championships in Budapest. The stand-out name among overseas runners is 32-year-old Kenyan Priscah Cherono, world bronze medallist in the 5000 metres in Osaka 2007 and Olympic finalist in Bejing. The field also features Polish 3000 metres steeplechaser Katarzina Kowalska, World Championships finalist in Berlin 2009 and one of the top stars of the big Diamond League meetings last summer. More Italian and foreign stars will be added to the top-level race and will be announced in the next days. We are looking to invite US athletes. I am waiting for more confirmed athletes who will be hopefully announced soon. We would like to start a good tradition of inviting US runners. We did not invite more African runners because we want a balanced race where Italian runners can hopefully emerge among the best athletes.
Italian middle-distance and cross country coach Giorgio Rondelli, who coached among the others Francesco Panetta, the last Italian winner at the Campacio, said: “For Lalli the race will be more difficult than at the European Championships. The African runners announced today are really strong. If it is snowy or muddy Lalli will have more chances to fight against the African runners. If the course is dry and the weather is fine, the speed of the Kenyan runners will be decisive for the win. The podium is within the reach for Lalli and Meucci. Fifteen-year-old Nicole Reina, who has been unbeaten for four years, will make her debut with the prestigious athletics team Pro Patria. I think she is one of the most talented athletes I have ever seen. She is hopeful to compete at the 2016 Olympic Games when she will have to turn 19. She is more than simply a middle-distance running hope.”